The NIACC athletic department will add women’s wrestling as its 15th sport starting in the 2022-23 academic year.

NIACC will be the fourth school from the Iowa Community College Athletic Conference to add the sport of women’s wrestling. Indian Hills, Iowa Western and Iowa Central were the first three schools from the ICCAC to add the sport.

“We are thrilled to announce the addition of women’s wrestling,” NIACC athletic director Cam Olson said. “The support by our President, Board of Directors, and campus has been outstanding and truly demonstrates how NIACC supports women in athletics. We are excited to join others within the ICCAC and nationally with the addition of this rapidly growing sport.”

Basil Minto, who is in his fifth season as an assistant coach for the NIACC men’s wrestling team, will be the NIACC women’s wrestling head coach. Minto was a two-time all-American wrestler at NIACC in 2012-13 and also wrestled at the University of Northern Iowa.

“I am excited for this opportunity,” Minto said. “I am ready to hit the ground running.” 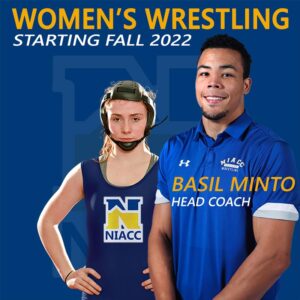 In January, the Iowa Girls High School Athletic Union announced that it will officially offer girls wrestling as a sanctioned sport starting in the 2022-23 school year. Iowa is the 34th state nationally whose high school sports governing body either sponsors girls wrestling or recognizes a girls’ wrestling state championship.

“We are excited to add women’s wrestling to our athletic programs at NIACC,” NIACC president Dr. Steve Schulz said. “Women’s wrestling is one of the fastest growing sports in the United States and in the state of Iowa.

“We have some of the strongest high school wrestling programs in the state in North Iowa and with the addition of women’s wrestling being sanctioned in Iowa it is the right time for us to start our program.”

The addition of women’s wrestling at NIACC will be the first sport added at the school since bringing back women’s soccer in 2017.

Rent NIACC Part of Over $5.5 Billion Contribution To Iowa’s Economy

August 2022 Entrepreneur of the Month