The North Iowa Choral Society presents its Annual Spring Concert, “Something Old, Something New, Something for Us, Something for You,” on Saturday, April 29 at 7:00 p.m. in the North Iowa Community Auditorium. The audition-only SATB choral ensemble is under the direction of Linda Ferjak and accompanied by Teresa Lursen. The ensemble, which is sponsored by North Iowa Area Community College (NIACC), has been vocalizing and sharing beautiful music with North Iowa audiences since Fall 1994 when the ensemble was formed under the direction of Robert Davis. The ensemble performs sacred and secular music from various genres (classics, spirituals, musical theater, jazz, swing, blues, etc.) and has performed at Iowa Choral Directors Conventions, the Choral Symposium, KCMR Live Christmas, Waldorf Performing Arts Series, NIACC’s Candlelight Christmas and Holiday Pops, and in NIACC’s Performing Arts Series with Shirley Jones in 2002.

Some of the featured musical selections include Ascendit Deus (Jacobus Gallus), Tutto Lo Di Mi Dici “Canta” (Orlando di Lasso), Lacrymosa from the “Requiem” (W.A. Mozart), Hallelujah from the “Mount of Olives” (Beethoven), Choose Something Like a Star from the Frostiana Series (Randall Thompson), How Can I Keep from Singing (American Folk Hymn arr. Ronald Staheli), and Bridge Over Troubled Water (Paul Simon). The ensemble is especially pleased to present Only in Sleep (Eriks Esenvalds), which was commissioned by the University of Louisville Chorale and Cardinal Singers. There will also be selections from within the ensemble including small groups as well as a male only selection and a female only selection. The ensemble will also feature several soloists from within the group and some local instrumentalists on several of the musical selections.

Linda Ferjak is a graduate of Wartburg College (BME) and the University of Northern Iowa (MM). She is a lifetime resident of Iowa and is just completing her 44th year of teaching music in Iowa Schools. Ferjak is currently the Director of Vocal Music for grades 7-12 at Bishop-Garrigan in Algona, Iowa. High school choirs under Ferjak’s direction have earned multiple Division I ratings in both large and small group contests, performed for numerous church and community events, and have represented their schools in the Iowa All State Chorus. Her choirs have sung in St. Matthews Cathedral in Washington D.C., Holy Name Cathedral in Chicago, and Our Lady of Guadalupe in New York City. In 2005 she was co-director of the North Iowa Youth Chorale participating in a Carnegie Hall residency performance and was the guest conductor for the North Central District Honor Choir and the Iowa OPUS Honor Choir in Fall 2012. Ferjak is an Adjudicator for the High School Music Association and has served as a mentor for first year teachers through the North Central District of the Iowa Choral Directors Association. She has also directed church choirs and community choirs in several communities over her lifetime of teaching.

The North Iowa Choral Society rehearses on Sunday evenings from 5:30-7:30 p.m. from September through April in the NIACC Vocal Music Room. NIACC offers credit hours for membership in the Choral Society for college students and continuing education credit for area vocal teachers who require continuing education accredited hours. If interested in membership, please reach out to Choral Society President, Julie Taylor, at 641-529-6039. You may also visit the ensemble on NIACC’s website at https://www.niacc.edu/academics/departments/vocal-music/nics/.

Tickets are $5 and may be purchased from any Choral Society member or at the door the evening of the performance. 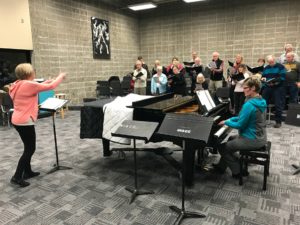 Christmas With the Annie Moses Band