NIACC Proudly Presents “Tibet: A Light in the Darkness” Film

NIACC Proudly Presents “Tibet: A Light in the Darkness” Film

Few places excite the imagination more than Tibet. This land is a mystical abode of Buddhist lamas, Shangri-la, yams, and the tallest mountain in the world. Let us transport you to an almost mythical world – one that sometimes confirms the viewers preconceptions, but more often shows a place that is almost beyond imagining. With its poetic visual style, “Tibet: A Light In The Darkness” lets the viewer witness events rarely seen by tourists.

Travel by Landcruiser and horse cart to “the top of the world” where singing and laughter ring through the mountains and valleys of Tibet. Explore mysterious Buddhist monasteries, join thousands of pilgrims on a holy Kora, camp beside a sacred lake, and sing with blind children. Learn about the history, traditions, and cultures that have placed the Tibetan people and their country in the world spotlight with producers Sean Cassidy and Patricia Keith.

The 2017-18 Travel and Adventure Film Series is now being shown in the Beem Center, Room 200. These films appeal to a wide audience of travelers. Beautiful scenery, out-of-the-ordinary locations, various cultures and people are depicted throughout the films. Tickets are only $5 for adults and $3 for students. Buy a season ticket for $20 and save the price of a single admission. Tickets may be purchased at the door. For information, call the NIACC Continuing Education office at 641-422-4358. 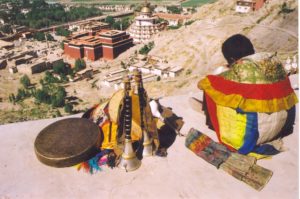