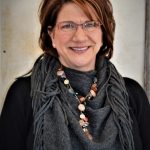 MASON CITY, Iowa – America’s SBDC Iowa (SBDC) is pleased to announce Staci Ackerson of Shankland Insurance, Charles City, as the winner of the 2019 Neal Smith Entrepreneur of the Year Award.

The Neal Smith Entrepreneur of the Year Award honors an Iowa entrepreneur who has been in business a minimum of three years and has been significantly assisted by an Iowa Small Business Development Center. The award was established with a dual purpose—to honor long-time Iowa Congressman Neal Smith for his years of service to Iowa’s small businesses, and to recognize Iowa’s entrepreneurs, who are the driving force behind Iowa’s economic growth.

Brook Boehmler, Regional Director, North Iowa Area SBDC, nominated Ackerson for the Neal Smith Award, stating, “Staci saw an opportunity to expand her insurance business, and began working with the North Iowa Area SBDC to help make her vision come true. Staci and her husband rehabilitated the historic Charles City Western Railroad depot to house not only Shankland Insurance, but to also provide executive apartments and rental storage units. Staci lives her commitment to bettering her community, not only through a physical improvements to downtown, but in also volunteering her time and resources to several organizations in Charles City.”

Staci and her husband Stacy worked to put together a plan that would not only house Shankland Insurance, but also provide executive apartments for long-term transitional corporate hires. Along with that plan, they used several pre-existing concrete piers for footing for small rental storage units, transforming a derelict property into an advantage for downtown Charles City.

Working with the North Iowa SBDC, NIACC Pappajohn Center, Community Revitalization of Charles City, and the Main Street Program, Shankland Insurance was able to apply for and receive an IEDA Main Street Challenge Grant, the Charles City Community Grant, and funding from First Citizens Bank to rehabilitate the historic building. Mark Wicks of Community Revitalization Charles City said: “Staci had a real vision. This was a serious nuisance property – they really cleaned it up and turned it into something Charles City could be proud of. She brought that building back to life while also expanding her business – it’s a win-win for everybody in Charles City.”