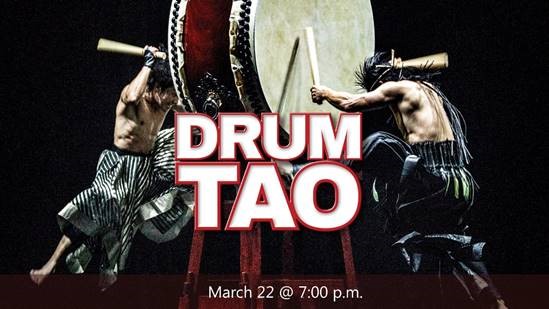 Samuel & Patricia Congello proudly present Drum Tao at the North Iowa Community Auditorium on the NIACC campus at 7:00 p.m. on Sunday, March 22nd, 2020. This presentation is part of the 2019-2020 Performing Arts and Leadership Series.

Established in 1993, Drum Tao creates phenomenal performances with Japanese Taiko drums and beautiful melodies with Japanese flutes and harps. Their performers are artists who constantly train themselves to go beyond human limitation.

Over 8 million spectators all over the world have experienced the wonder of Drum Tao. In 2004, they attended the world’s largest festival of the arts, the Edinburgh Festival Fringe, and made it to #1 box-office smash hit of the festival despite it being their first time.

After their success at the festival, they launched a three month long run in Germany and Australia. After they performed at the Vancouver Olympics in 2010, every show on their first North American tour sold out across 44 cities. Drum Tao has played in 26 countries and over 500 cities.

In 2017, they made their major recording debut from Universal Music as a compilation of their work for 25 years, which ranked as one of the top three in the iTunes World Album Ranking in five different countries. In 2018, they performed in the opening ceremony of “Japonism 2018” in Paris, France. They also costarred with the Bolshoi Ballet as the opening act of “Japan Year in Russia” held at The Bolshoi Theatre in Moscow, Russia.

They were awarded “Outstanding Cultural Contribution” from Oita prefecture, “Culture Creators Award” from Taketa City, and “The 6th Japan Tourism Agency Commissioner Award” and “Minister for Internal Affairs and Communications Award” from the Japanese government.

To learn more about the show, visit www.drum-tao.com or watch a video at www.niacc.edu/palvideos.