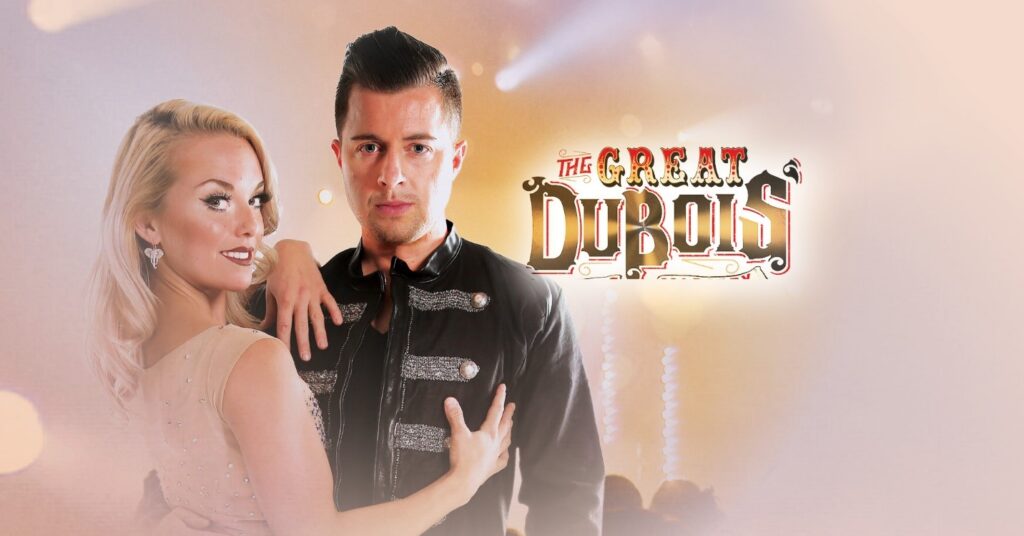 MercyOne North Iowa Medical Center and Country Inn & Suites proudly presents The Great DuBois at the North Iowa Community Auditorium on the NIACC campus at 3:30 p.m. on Sunday, February 27th, 2022. This presentation is part of the 2021-2022 Performing Arts and Leadership Series.

The Great DuBois is a fast-paced, high energy circus show for all ages, showcasing incredible feats of juggling, hula hoops, unicycle, aerial, circus stunts, contortion, magic, and audience interaction, all wrapped up in a blanket of comedy. Simply put, it’s the most unique two-person circus show you’ll ever see!

Recently featured in Hugh Jackman’s hit movie, “The Greatest Showman,” The Great DuBois have amassed an impressive list of credits, including appearances in the Tony Award-winning “Pippin” on Broadway, “The Tonight Show with Jay Leno,” “Late Night with David Letterman,” Britney Spears’ World Circus Tour, and the movie “Burlesque” to highlight just a few.

The award-winning combination of Michael DuBois and Viktoria Grimmy have five generations of circus performing between them, and have wowed crowds at countless shows at theatres, universities, cruise ships, fairs, and festivals the world over.

Michael DuBois has been performing for over 15 years. He was born and raised in the small town of Horseheads in Upstate New York and went to the circus each year with his grandparents. As a kid, Michael was curious to learn any new skill he could. He learned to juggle in middle school and ran the juggling club and magic club at Penn State University. He moved to New York City, where he performed for many years before opening The Great DuBois with his wife and performance partner, Viktoria.

Viktoria is a 5th generation circus performer, born into a multi-generational circus family who toured with the Soviet Circus. After a beautiful career in Russia, Viktoria’s parents wanted to expand their opportunities to the United States and moved their children to New York City. Shortly after, the Grimmy Family Circus was touring, eventually joining with The Ringling Brothers, Barnum and Bailey Circus all over the US. Viktoria has been on Broadway, in films and commercials, and on tour with Britney Spears.

Please note, all guests (over the age of three), staff, and volunteers are required to wear a mask regardless of vaccination status. Other mitigation efforts may also be in effect. Please visit www.niacc.edu/pals or call the Box Office to stay apprised of our most recent policies.

To learn more about the show, visit www.thegreatdubois.com or watch a video at www.niacc.edu/palvideos.

The Broadway sponsor for the 2021-2022 Performing Arts and Leadership Series is Drs. Beck, Bhangoo, and Ondoma: Neurosurgery of North Iowa, P.C.

Christmas With the Annie Moses Band