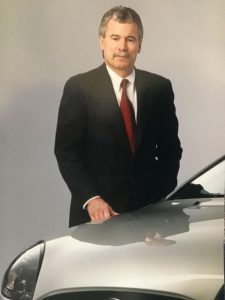 Bill joined Ford Motor Company in 1965 as an accountant after graduating from Mason City High School (‘61), Mason City Junior College (‘63) and the University of Iowa (‘65). He later earned a master’s degree from Stanford University, where he was a Sloan Fellow.

Dick Carter knew sports. He also knew a little about NIACC athletics…he ran the clock for 49 years for Mason City Junior College and NIACC home football games and 48 years for home basketball games. It took hip surgery to prevent him from reaching the 50-year mark in these roles.

Dick’s loyalty extended beyond the College, which he attended in 1973 and again in 1982. He served 32 years as an employee of Mason City Mill Works and 20 years with the Boy Scouts. Dick was very involved with his church and monitored the school cross walk on 12th Street in Mason City for many years.

Dick passed away on March 13, 2004 at the age of 83. He is survived by his wife Lydia, two grown children, and several grandchildren.

John Hitzhusen’s affiliation with the College began more than 70 years ago when he graduated from Mason City Junior College in 1934. A retired dentist, John represented the Charles City area on the NIACC Board of Directors from 1970 to 1993. He joined the NIACC Foundation Board of Directors in 2001 and continues to serve on that Board today. He and his wife, Donna, also support the annual Charles City Gourmet Scholarship Dinner. The Hitzhusens, who have two grown children and four grandchildren, are advocates for the College at every opportunity they encounter, and they have recruited many students to NIACC. In 1998, during the “Keeping NIACC First” major gifts campaign, the Hitzhusens established an endowed scholarship fund in their name which benefits students from Floyd County. John is also a recipient of the prestigious NIACC Shining Star Award.